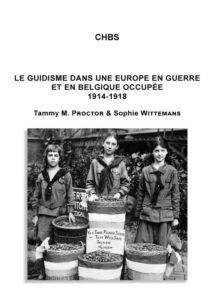 In this volume about Girl Guiding and the First World War, the American historian Tammy Proctor focuses on showing how much the world war has been useful to the Guide movement while at the same time it was still very much in development and expansion.  The war allowed the movement to prove its social usefulness through war service and to establish its reputation.  Vastly remodeled and restructured over the same period in the United Kingdom, Guiding was able to consolidate at the international level and definitely take its place in the world of women's organisations at the end of the war.  Simultaneously, it spread the new feminine model of "citizen-mother" attached to peaceful internationalism.  The Guides took part in the post-war reconstruction of the nation.

In Belgium, Guiding is set up during the German occupation of Brussels and much of the country.  Sophie Wittemans shows how Belgian Guiding emerges "thanks to" the occupation, as a useful charity, fully incorporated in the often hard and sometimes tragic circumstances of the German occupation.  When the war was over, Belgian Guiding was able, despite the hardships and even drawing a part of its strength and international reputation from them, to resolutely join the ranks of the international guiding organisation.